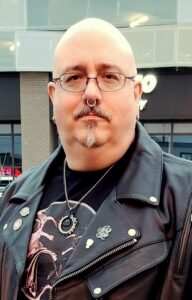 This is me, Dave Smith. In most of my online, esoteric, and artistic endeavors, I use the pseudonym Vargr, or more specifically Vargr23. This is an Old Norse word with a complex English translation. It means both wolf and outlaw. It indicates someone who is outside the bounds of normal society, especially its morality. Incidentally, to prevent the recurrence of past misconceptions, I am not a lycanthrope, a furry, a Norwegian metal icon, or a Traveller enthusiast. I was once declared an outlaw by the Gothi of the Dragon’s Hearth Kindred, so at least I do come by the moniker in the traditional way.

My primary profession is that of Data Architect. I design and build databases and the means by which data flows into and out of them. I’m also a writer, leatherworker, researcher, and practicing sorcerer. I have a profound interest in information itself, the processes by which matter and consciousness emerge from it, and the possibility that directed intent can exert some degree of control over this emergence.

This site is an amorphous experiment in self-expression and a vector for disseminating nefarious magical operations. I assert that the world of consensus reality that is experienced by billions of people every day is a mass fabrication. I want to help others find their own mental and magical tools so that they can at least entertain this notion themselves, and hopefully begin to manipulate their own corner of this reality to their own best interests.