The genesis of Spikevision can be traced back to December of 1997. Due to certain unfortunate circumstances in my life at that time, I decided that I was in need of a different point of view. I pondered rose-colored glasses, and then their opposite. I came up with the concept of spike vision goggles. These goggles would penetrate the illusionary, happy, sine wave world that was placed before me. They would see the nasty, real, EKG-looking wave forms that constitute the way the world IS rather than the way it SEEMS. I was probably inspired by the sunglasses in John Carpenter’s “They Live”, but to tell the truth, I cannot remember if I was or not.
I began referring to spike vision in my journal, where it became SpikeVision, which I began to envision as some sort of product, with a 1950’s style print add selling it as a commodity: Get Spikevision! It penetrates all chicanery and obfuscation. See the Truth today! etc. In order to sell something, it has to have a logo. The first sketch I came up with was this: 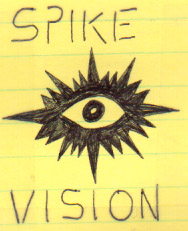 Armed with this design to work from, I created the symbol that now represents the concept of SpikeVision. I call this the Eyecon. 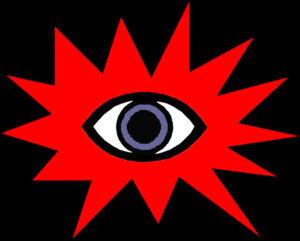