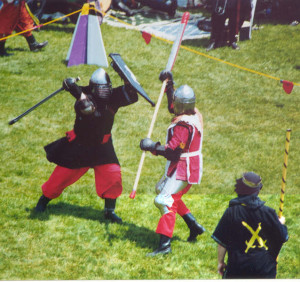 As I posted in August, I originally wrote this article for the Red Company website within the Society for Creative Anachronism. In October of 2018, the Middle Kingdom website was re-launched, and the Red Company site is no longer there.  I am re-posting this so that it remains accessible.

Combat Awareness, or Zanshin (‘reserved mind’, among other translations) in Japanese, is a state of alertness, balance, and control, both physical and mental, which can have a profound positive impact on an individual who possesses such skills.

This article is a brief, and by no means comprehensive look at how this principle can be applied to SCA armored combat. I’m sure that some will read this, and think it rudimentary and over-simplified, and others might have no desire to make this type of training part of their regimen. Both of these are perfectly acceptable reactions. It is for those who are looking for something more from SCA combat, and who have not had other appreciable martial arts training that this article is directed. There is much more to learn about this and its related concepts such as meditation and breathing exercises.

Mental preparation is a vital part of any martial art or athletic endeavor. It seems that relatively few armored combatants in the SCA have a physical training regimen outside of fighting itself, and fewer still go beyond to examine the mental aspects of our combat. It’s often fairly easy to identify those who have mastered the mental aspects of our combat, as they are often adorned with coronets or white belts or baldrics. When two combatants are equally matched in physical skill, the one with a better mental state will usually win the fight. Even against a superior opponent, a less experienced fighter can often make up the difference mentally.

First it should be understood that this kind of awareness is not a mystical and unobtainable state, but can be learned through repeated practice. By following a few simple steps on a regular basis, good habits that promote awareness and mental focus can be developed.

Preparation:
The level of mental preparation required by any given fighter will be different, and the same fighter might need different degrees of preparation in different circumstances. A pre-fight regimen of stretching and clearing the head of obstructions is a good first step. (If nothing else in this article sticks with you, believe me on the stretching. Always stretch out before fighting. Lack of this is probably the single largest cause of preventable injuries in our combat.) Duke Moonwulf’s article The Metaphysics of Fighting has a good example of this, using visualization as a preparatory ritual. Make the donning of armor into a ritual of its own. Spend as a little as few minutes paying attention to the details of your actions. Let extraneous thoughts drain away. Be present in the moment.

Mental State:
There are multitudes of factors that can affect your performance mentally. Sleep deprivation, anger, hunger, and numerous others. Many of these factors cannot be directly countered. Awareness of their presence is often the best that can be hoped for. Some factors, however, can and should be dealt with. Never fight if you are angry. It leads to injuries, either yours or your opponent’s. Even if no one is injured, you will still not fight up to your true capability if your mind is preoccupied. It is better not to fight, than to fight unsafely.

Not everyone can maintain a state of calm while fighting, especially during large tournaments, but even a small amount of attention paid to settling yourself can go a long way. Between rounds, try to relax. If you have pieces of armor that are restrictive or uncomfortable, and can be easily removed, do so. Breathe deeply. Shallow, panting breaths are not as efficient in supplying oxygen to the bloodstream. Deep breathing also promotes a more relaxed physical state.

Focus:
Too often in armored combat, we lose focus and become distracted. This can include anything from falling prey to a feint, to something outside of the listfield catching our attention. The key to avoiding this is to look broadly rather than deeply. Don’t fixate on any one thing visually. Scan continuously. Take advantage of your peripheral vision by looking through your opponent rather than at them. This will give you a better overall ability to detect minute movements or changes in direction. It should go without saying, but concentrate entirely on the fight you are in. Never look past your current opponent in a tourney until you have helped them up from the ground to shake their hand.

Awareness:
Awareness includes awareness of your surroundings, of your opponent(s), and of yourself. Study your own movements, and those of your opponent. This will provide maximum efficiency in both offensive and defensive movement. The ultimate goal is to have complete control of your own timing and movement. This will allow you to control the fight. If you know where you are in relation to the borders of the listfield at all times, and your opponent lacks this awareness, it can give you a distinct advantage.

Awareness of the self can include factors such as your range of motion, your exact weapons range, and the ability to determine if you have been injured, even through a good dose of adrenaline. Your body knows when its hurt or overheating, so listen to what its telling you. If you practice slow work, or with a pell (and I highly recommend both), learn how correct stances and movement feel to your body. How do the muscles in your arm feel as the blow goes through its range of motion? How does your weight transfer as you move? How are your feet positioned relative to each other? Can you feel the point at which you must decide to recover to a ready stance, or to continue movement into a combination? If you can develop enough body awareness to feel these things, they can become second nature to you. The key is not to expect too much too soon. Pick different aspects to concentrate on each time you practice. One instructor I have trained with outside of the SCA emphasized the mantra: “Grace before speed.” In practicing these techniques, this is of utmost importance. Learn your moves slowly, deliberately, and correctly, and your body will remember them.

Application:
The ideal defensive situation is to be able to focus on the immediate threat, neutralize it, and forget about it. Analyze the details of the fight after it is over.
Whether you win or lose, analyze how and why the fight ended. Another side to awareness is concealment of your own intentions. Part of this is not revealing weaknesses in your own style to an opponent. Don’t give anything away. If you can’t block a rising wrap shot to save your life, don’t put yourself into a position where you have to. If you are losing to a particular person, or against a particular weapons form, train to adjust your techique appropriately. Remember that an experienced opponent will be trying to do the same things to you that are to him or her.

One of the offensive uses of awareness is noticing and capitalizing on weaknesses in your opponent’s technique. Sometimes these openings are immediately noticeable, sometimes it requires several exchanges, or even several losses to a particular opponent before you can see the patterns. Look at how your opponent moves. When you’re not fighting, watch others who are. The things you learn by observation can pay off greatly.

In the literature of Mizoguchi’s ITTO-RYU school of kenjutsu, it says:

“Zanshin means to reserve one’s mind and is the principle of never letting one’s guard down, even when one’s victory seems to be complete. It is very difficult to judge whether the opponent has any other trick ‘up his sleeve’, even when you feel that your cut or thrust has had a good effect. There are many examples of unexpected defeat in history. When you strike down the opponent and cut his head off, you should still never let down you guard, and this is Zanshin.”

You may perhaps have seen the application of this principle. Has an opponent in mid-drop whose legs you have just taken ever hit you in the head? Have you ever been certain that a shot you threw was good, only to hesitate just long enough to watch a sword rebounding off your face plate? These are only two examples. Until you are certain that the fight is over, never drop your defenses. 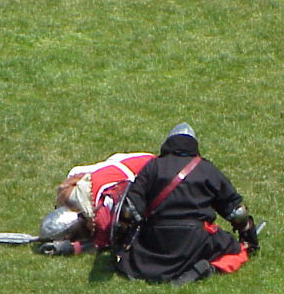 Conclusion:
I hope that this article has shown the importance of the mental aspects of our combat, as well as the benefits of cultivating a sense of combat awareness.
Once learned, these skills have a broad range of applications outside of combat activities as well.